I didn't have an opportunity to "alter" my crate substance this week, so this is a container straight from the CSA. I would have held off on more potatoes, I think, however else I'm pretty darn amped up for everything that arrived. 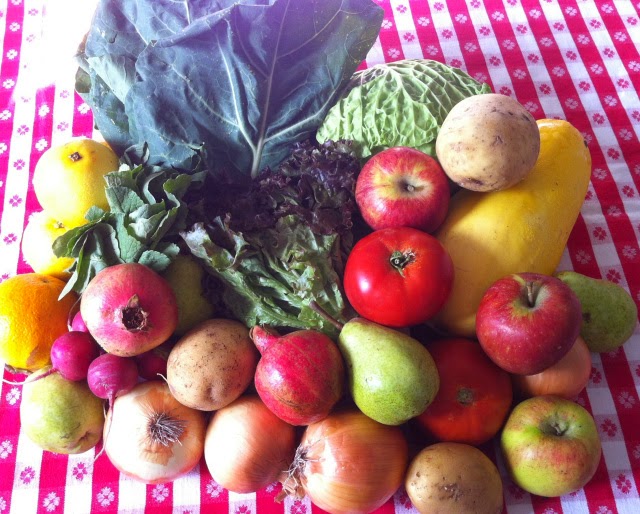 I'm attempting to stay on top of the potato convergence. This present week's will get utilized alongside the onions as a part of my vegetarian turn on a Marcella Hazan potato-tomato gratin. So yummy. The Savoy cabbage is energizing. I used to utilize it as a part of ribollita (Tuscan bread soup), however I haven't made that since going without gluten. I do have some somewhat stale yet at the same time tasty garlic-kale sourdough from Bread Srsly, so perhaps I'll give that formula a return to. Meanwhile, I'm going to go for a formula from The Vegan Slow Cooker for Hard Cider and Cabbage Stew. I have a pitiful minimal past-its-prime apple that will be exceptionally cheerful to go into stew, I think. The spaghetti squash is interesting. Such a large number of individuals suggest consuming it like pasta, with a sauce on top, however that isn't super engaging. I've discovered a formula for spaghetti squash cakes I'm anticipating going for. I'll tell you how it goes.

I adore this fall products of the soil. Peaches and nectarines and cherries are so debauched and such a treat, however I get similarly energized at the entry of fall products of the soil like fruits and pears and pomegranates. The oranges are extremely pale – a few them are lemon-yellow – so I'm trusting their flavor is more powerful than their appearance! I see greens not too far off too with lettuce and radishes and tomatoes, which is great on the grounds that I've been having genuine mixed greens yearnings. The collards may go into green smoothies, I haven't chosen yet what I need to do with them. I acknowledge how strong they are on the grounds that, not at all like something like chard, that implies I have a couple of days to consider how I need to utilize them.

I am connecting this post to the week by week CSA round-up over at In My Chucks. Go look at it to gaze at other individuals' cases and get some incredible thoughts for what to do with our occasio
Posted by Lisa Joe at 23:40 No comments:


Fanaticism is a belief or behavior involving uncritical zeal, particularly for an extreme religious or political cause or in some cases sports, or with an obsessive enthusiasm for a pastime or hobby. Philosopher George Santayana defines fanaticism as "redoubling your effort when you have forgotten your aim"; according to Winston Churchill, "A fanatic is one who can't change his mind and won't change the subject".

By either description the fanatic displays very strict standards and little tolerance for contrary ideas or opinions. In his book Crazy Talk, Stupid Talk, Neil Postman states that "the key to all fanatical beliefs is that they are self-confirming fanatical not because they are 'false', but because they are expressed in such a way that they can never be shown to be false." The behavior of a fan with overwhelming enthusiasm for a given subject is differentiated from the behavior of a fanatic by the fanatic's violation of prevailing social norms. Though the fan's behavior may be judged as odd or eccentric, it does not violate such norms.

A fanatic differs from a crank, in that a crank is defined as a person who holds a position or opinion which is so far from the norm as to appear ludicrous and/or probably wrong, such as a belief in a Flat Earth. In contrast, the subject of the fanatic's obsession may be "normal", such as an interest in religion or politics, except that the scale of the person's involvement, devotion, or obsession with the activity or cause is abnormal or disproportionate.
Posted by Lisa Joe at 06:01 No comments:


The woodpeckers, piculets, wrynecks, and sapsuckers are a family, Picidae, of near-passerine birds. Members of this family are found worldwide, except for Australia and New Zealand, Madagascar, and the extreme polar regions. Most species live in forests or woodland habitats, although a few species are known to live in treeless areas such as rocky hillsides and deserts.

The Picidae are just one of the eight living families in the order Piciformes. Members of the order Piciformes, such as the jacamars, puffbirds, barbets, toucans, and honeyguides, have traditionally been thought to be very closely related to the woodpeckers, piculets, wrynecks, and sapsuckers. More recently, DNA sequence analyses have confirmed this view.

There are about 200 species and about 30 genera in this family. Many species are threatened or endangered due to loss of habitat or habitat fragmentation. Two species of woodpeckers, the Ivory-billed Woodpecker and the Imperial Woodpecker, have been considered extinct for about 30 years (there has been some controversy recently whether these species still exist).

Adults have brown upperparts with dark streaks on the back and are white underneath with dark streaking and a dark brown spot in the middle of the breast. They have a brown cap and a long brown rounded tail. Their face is grey with a streak through the eye. For subspecies, see below.
In the field, they are most easily confused with its congener the Lincoln's Sparrow, and the Savannah Sparrow. The former can be recognized by its shorter, greyer tail and the differently-patterned head, the brown cheeks forming a clear-cut angular patch. The Savannah Sparrow has a forked tail and yellowish flecks on the face when seen up close.

Although they are a habitat generalist, their favorite habitat is brushy areas and marshes, including salt marshes, across most of Canada and the United States. They also thrive in human areas, such as in suburbs, along edges in agricultural areas, and along roadsides. In southern locations, they are permanent residents. Northern birds migrate to the southern United States or Mexico, where there is also a local population resident all year round. The Song Sparrow is a very rare vagrant to western Europe, with a few recorded in Great Britain and Norway.

These birds forage on the ground, in shrubs or in very shallow water. They mainly eat insects and seeds. Birds in salt marshes may also eat small crustaceans. They nest either in a sheltered location on the ground or in trees or shrubs.